The last month was quite busy, majority of time spend on finishing the flares, well to a state that I could send them off to the professionals to add there flare to them in the form of smoothing them out and spraying them. Hopefully I will have them back before the end of the month, seeing that they are just plugs, I still need to make moulds and then the actual flares. Seeing that I started losing my mind getting this stuff ready, I needed something to keep me distracted and going, this came in the form of some parts or at least the idea that I already paid for them and just need to wait for delivery. 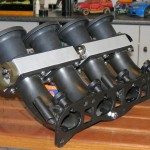 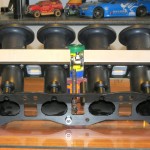 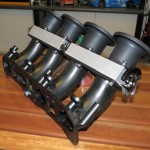 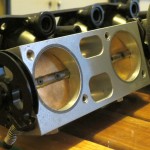 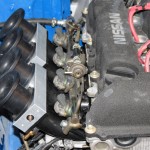 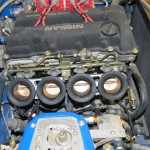 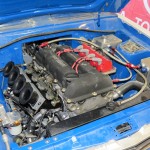 The first of these came in the form of throttles, 4 x 50mm of it made to fit the VE motor. Well I removed the piggy bank, took it for a ride with a bag over its head, stopped hit it with a baseball bat and bought the set. This was either a very good idea or a very crappy one at best, I spend hours getting the FWD intake to fit the RWD configuration, bought a very specific air filter etc., now it will just sit in the cupboard waiting on better days. This was the kind of thoughts that went thru my mind, to add to this loosing idle control was going to hurt. What is done is done, once I got home with them in hand, it didn’t take long to strip them for further inspection, seeing that everything can be improved or made to work, hell I’ll even strip it just to assemble it again, just maybe a brain wave hit me. Seeing that time is my current enemy, I was under the impression that sock filters will be the temporary solution until I can build an air box for it. Luckily my brother had a set laying around I could use for measurements. 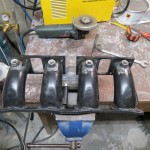 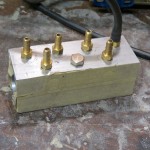 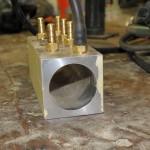 Luckily for me Ian from Rezlo Auto Works that supplied the majority of the imported parts on the car quickly solved my idle control dilemma. The solution was actually quite easy, drill a few holes in your new set of ITB’s, weld a few sockets in place and build a custom vacuum manifold for the Idle Air Control Valve. The merits in doing this out weight the cost off a new coat of epoxy and welding commenced. While I’m waiting for the piece to come back from the engineering shop,(which was tasked to tap the 5 1/4″ BSP holes, as I’m not willing to spend R350 – R600 on a BSP or NPT tap to do it myself) I started with a second vacuum manifold for the MAP sensor and Fuel Pressure Regulator. Once the lazercutting arrives I’ll be able to finish the manifolds and mount them, part of this mounting would also incorporate the throttle cable brackets. This reminds me, I still need to redesign the original idle adjuster and butterfly stop for my needs. 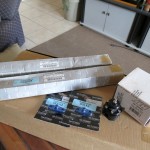 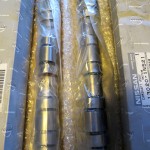 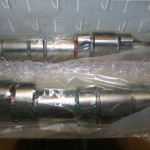 A week or two later a box from RAW arrived with a few parts, most noticeably the set of Genuine OEM SR16VE N1 cams. This was only 2nd or 3rd time during this cars build that a set of these cams became available and had to put my name on them. Not much to look at, but I’m pretty sure they will do their work quite good above a decent set of springs and retainers. Digging deeper in the box the two fuel rail adaptors jumped out just before a small AEM Fuel Pressure Regulator, now at last I can replace the busted FPR and in the process get rid of the damper on the rail. The FPR was specifically chosen due to its small size and mounting configuration, seeing space in the engine bay is limited. Hopefully the fittings will arrive soon in order to get the car running again to move it around. 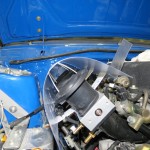 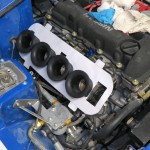 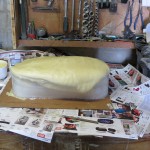 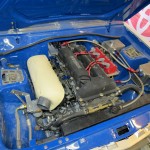 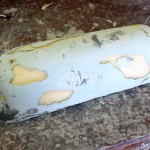 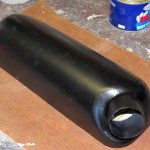 Seeing that the flares are almost on their way back and then I will have to make moulds of them, I needed an air box, seeing that the unit I bought from the builder of the throttles was not to my taste and would be hacked to piece to work in my car. This proved to be the perfect circumstance to build my own air box, make a mould and then the actual air box from fibre glass…… and here I thought I was done with foam and sanding body filler for an eternity. A few measurements later and a couple of plastic pieces glued together I was able to designed a backing plate and used that as the basis for the air box. Some foam was mixed together to form a nice bread like shape, left it to dry overnight. The next morning I was up nice and early and started shaping the bread. A few hours later it started to look like an air box that was made for the car. Found a piece of pipe with a 70mm OD and started positioning it on the foam air box as the filter mount, seeing that I have this brand new unused K&N, I hope the 70mm will be enough. Once this was in place, I started covering the outer with body-filler, once dry, sanding it down, adding again, sanding again, this continued until the tin of body-filler was almost empty. By that time I was happy with the finish, not perfect, but due to the fact that I was in a hurry it was good. Grabbed a tin of Hi Heat black paint in the cupboard, why, because it dries fast and I had to leave for a family affair 120km away and was already late. This was also the first fail, as will be told later on, well sprayed it 3 nice thick coats and off I was. 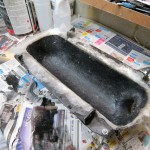 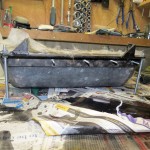 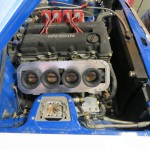 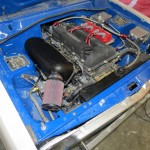 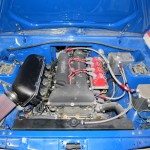 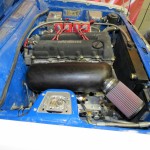 Once back home the next day, I started applying wax and polishing it, 3 layers later and I added a single layer of gel coat. Once the gel coat dried I started with the 4 layers of 450g fibre-glass cloth to get the mould nice and strong. The next morning I tried removing the plug from the mould, this is where the fail part came in, I had to break it out, I’m pretty sure the Hi Heat paint was not what I should have used, seeing that it almost melted. The one thing that was strange was the fact that the sides crimped, this was rectified with bolting two pieces of angle iron to the sides to pull them straight, this also provided an excellent location to mount some feet. Again, wax and gel coat went on, once this was done, I started with 1 layer of tissue, 1 layer 450g fibre and another layer of tissue on the sides. The corners received an additional layer of fibre. The next evening my brother had to help me pull it from the mould, but this was due to the strange angles of the mounting flange for the filter, but I as very satisfied with my first ever fibre-glass part. Just a few spots to fix and then some paint and it would look real nice. All in all I learned a lot with this little part and will apply the newly gained knowledge when working with the flares.