A few things happened in the last month, not that much to the Datto, but at least we were very busy with Datsuns. First things first, since the last update, I managed to apply 2 layers of battleship grey to the underside and front wheel arches, I:m pretty sure it is sealed good and will keep future rust away for a while. I must admit, it is a pleasure working on the underside of the car, no oil and other deposits that just cause chaos with the whole experience, I love it and would recommend the extra time taken to do the same to their vehicles. 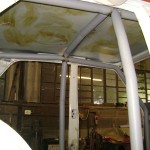 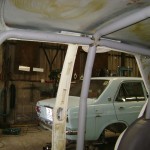 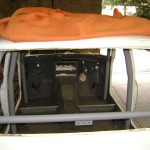 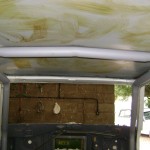 Work on the roll cage is going very slow, 2 reasons for that, we were busy with 2 other Datsuns and building the cage as neat as possible is a very time consuming job, especially with all the pipe miters that need to fit decent, then welding these pieces together is no small task, you need to teach your body to assume positions that it never knew were possible. With my free time between the other 2 Datsuns, I was able to lend a hand and help my father with the cage, we managed to get 2 lateral half-roll bars and the 2 backstays in on a weekend. On the subject of the backstays, this could be the only possible part of the cage that some scrutineer could have a issue with, as out of all the FIA documentation there is no place that suggest that the backstays need to be straight, but all the pictures show it as being straight. I opted to have it following the roof line to hide it in some way, in case of a slow roll, not messing up the complete roof and to enable me to stick my head in further thru the back doors. If they have a issue with it, I:ll add 2 more straight pipes for them. 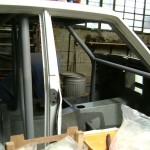 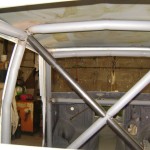 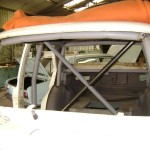 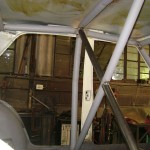 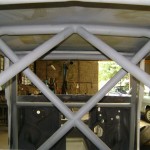 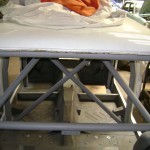 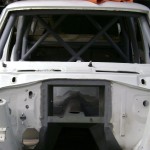 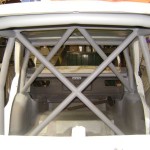 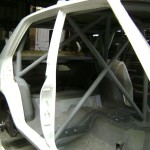 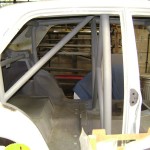 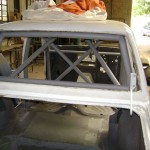 The weekend that followed we managed to add the front transversal member, know sporting 3 bends, it just fitted in place as this was the way it was meant to be. We also managed to add the 2 separate pieces on the diagonal behind the seat to complete the cross. Some time was spared and I was able to start with some of the final or semi final installation. I wanted to start with this to figure out if I had all the bolts and little pieces needed. Managed to install the rear sub frame permanently, the front cross member was installed, but I realized that I forgot to get it:s washers electro plated, this was a sore point, but at least I know now what to get done to make it a final assembly. The logistics on this project is starting to get to a point where it alone is a little project on its own. 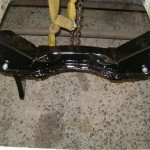 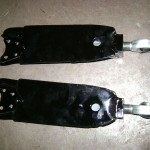 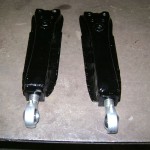 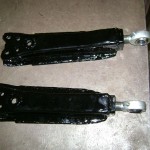 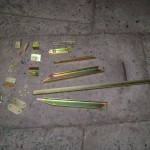 On my last visit we started the morning with welding all the pipes together, completely. Previously only the support plates and roll bar was welded completely. This alone took about 4-5 hours to get completed, some time was left to add the rear diagonal backstays. The rear of the cage, behind the seats is now 80% complete, only 2 supports is missing. On the front side of the cage there is still a lot of work, windscreen pillar supports, door bars, roof reinforcement, supports and gussets is missing. I also managed to assemble the rear suspension to make sure everything is in order, this looked like quite a easy and fast job, but it turned out to be completely the opposite. I forgot about the hub carriers that we had machined to take VW Golf III front wheel bearings. There was quite allot of work needed to finalize the conversion, luckily I got everything done and the car was sat down on its rear wheels and pulled out of the workshop for a fresh coat of primer to keep the rust away over the big days.

Know let me explain the story regarding the work on 2 other Datsuns, as some of you would know, I retired my bakkie at the end of the season with a overall placement of 8th in the championship and 2nd in class, missed the class victory with 1 single point. It was the best season for me to date and the most fun, by no means easy as every event was a challenge as my main competition is running a 1600 Toyota 4age powered Nissan bakkie with a LS in the back. I’m not looking for excuses here, but I just need to say, it is very nice to chase down these sorts of vehicles with a 1400 powered bakkie with a open differential, the amount of thought that went into controlling wheel spin could be felt after each event. Rust was taking over and after each event I could say that the bakkie was on a nice steady diet. Thanks to the :Rust Bucket: for sticking with me and performing the way you did, you will be remembered. To get back to the actual story regarding the 2 Datsuns. As the bakkie was retired and the new car is far from done, I need something to compete in next year. Our original thought was that I will just sit out until my car was done, as this would give me more time to complete it. After some discussions between me and my brother we decided that I can start the season with his Datsun 1200 until my car was done, just for the fun of it and to support the sport. But then our motor club decided that they need to be the only motorsport club that only allows one chassis number to compete, this meant that if I start with x car I need to finish with it, if I want all the points to count. This had me thinking, leave the sport, scrap the season or just go and leave marks on the track. Well this is the process and outcomes that followed our decision:

Tow my bakkie and my brothers 1200 to the workshop and start the transformation. :Rust Bucket: was to enter retirement with a 1200 motor, gearbox and differential. Whilst 1200 sedan will make it’s start to gymkhana as a 1400. We basically started to swop the motor, gearbox, differential, suspension, pedals, etc , etc. This was one hell of a load of work, as both vehicles had to go thru police clearance and pass road worthy. We decided to finish the bakkie first as it was to be sold, currently we are still busy with the 1200.

This is what emerged to date: Lil Datto 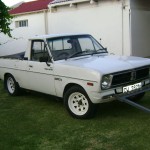 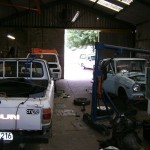 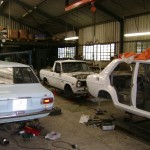 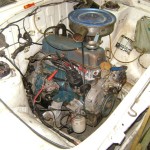 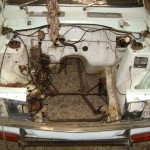 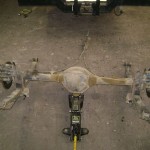 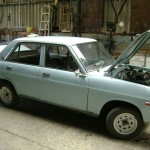 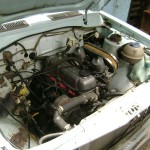 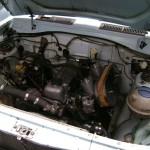 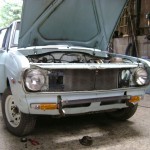